I was strolling down the pier when I ran into my friend Brian.  “Did you see what the hurricane is doing?!” I asked. I was hoping to get a reaction, but the vibe I got was more like: “are you guys really freaking out again?” According to the forecast, we weren't in the path. My clowning failed.
He calmly asked me, “are you guys doing anything to prepare?”
Of course we weren't. Neither of us were too worried. We were both glad that the forecast cone clearly showed the storm heading way offshore.
“Those people in Haiti are getting screwed. Again.”
“Yeah. Jesus.”

The general feeling around here at this time of year is that it's a Safe Haven. People come to the St. John's specifically for that reason. The warm waters of the Gulf Stream tend to carry Caribbean storms way offshore by the time they make it this far north. “Nothing has hit here since Dora in 1964,” we all like to parrot.

I returned to the boat mumbling to myself. Jesus. Haiti. Haven't they had enough?  When I got there I asked Kim, “have you checked out Sailing Uma's stuff lately?”  “Yikes,” she said. She hadn't, but the thought of them gave us both the chills.

It was a little over a month ago that we had been carrying on about them. We really love watching their videos. We were pretty sure that their latest destination was Haiti.

Dan and Kika have done an outstanding job fixing up their old boat Uma. They jumped right in to some serious boat projects and are trying out new technology that most of us are still afraid of even considering. They've outfitted Uma with an electric engine, heavy-duty solar system and are even experimenting with their own concept in bottom paint. But WHY, Kim and I wanted to know, why were they in such a hurry to head south right into the teeth of peak hurricane season? It wasn't something we would consider doing. Then again, Kika is Haitian. Maybe she knew something we didn't. Regardless, we really like them and we were seriously worried about their well being.

Kim pulled up their facebook page and we reeled back in horror at what we saw. Dan had just posted his and Uma's location. He was all alone and bobbing around right at Ground Zero on the west end of Haiti. It was to be his first experience anchoring in a hurricane and it was a whopper.

We parked it on the settee and assumed a hunched-over FB-stance. Based on Matthew's trajectory, it looked like he had picked a decent spot, but it looked like he might be faced with a lot of fetch if he was in Easterlies at the beginning of the storm. From that point on we were glued to the screen.

Comments steadily streamed in. Remarkably, Dan was interfacing regularly with an Internet crowd of supporters wishing him well and offering advice. A few doom-sayers chimed in, but Dan clearly maintained cool as he checked off all the boxes on what is every sailors most dreaded list.

We lost serious sleep worrying about Dan, Kika and their cute little boat. We even set an alarm for the middle of the night just to check in. In the meantime, new developments were unfolding. It was with red eyes and sleepy brains, overjoyed that Dan and Uma had made it through, that we intercepted some Monday morning bad news.

“Have you seen what Matthew's doin'?!” our friend Tom asked. “It's headed straight for us!!!”

Once again, we found ourselves staring into our palm and reeling in horror.

In case you don't know us, Kim and I have been traveling and working on our boat for eleven years now. And I do mean working on the boat. It was in a seriously rough state when we bought it. It was largely unfinished beyond the most basic campy necessities. That, and heavily damaged from a tropical storm.

Having spent the last decade plus daydreaming along the way about what we've always wanted our boat to be, we've finally hunkered down and set out to finish the project. The whole she-bang. Currently, it's more of a construction zone than a voyaging vessel.

Despite our condition, we quickly decided there was no way in hell we were going to ride out Matthew at the pier. Projections were calling for seven feet of flooding on the St. John's River due to storm surge and tributary flooding. According to the projected path of the storm, the marina would be on the lee shore facing a considerable fetch. The wind forecast when we pulled off was hovering around one-hundred mph.

It wasn't without a few butterflies that we slipped the lines on Wednesday. We wouldn't have a cook stove for soup and hot coffee – it was disconnected. There was no head, no shower, and very minimal functional wiring. We had to hook up the steering before we could even get started.

Immediately after pulling off the pier, we came to a standstill with our ass to the broken pilings on an abandoned pier. There were too many barnacles on the prop. We quickly bailed out our brand new anchor and chain that I had just hooked up and jumped into the black water to get cut up. Shortly after, the refrigerator conked out. Next, the sea-water cooling jambed. That was right before we could dig in our second anchor.

Since tying up to this pier we've put in a solid year and a half of skinned knuckles and steady heartache. Now, tucked away in our own little cove, contemplating our destiny, there was nothing more to do than shrug our shoulders and give a chuckle as we watched them upgrade Matthew to a category 4 and swing in even closer. We were wishing like hell that just like Dan, we too had a 105 pound Mantus.

Kudos to you Dan. Nice work! 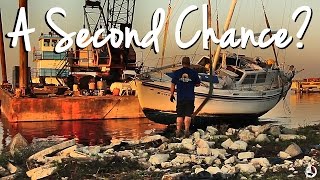 You May Also Enjoy:

8 Comments on “Hurricane Matthew — Caught With Our Pants Down! Part 1”